Get the Facts on Zoning

There is an affordable housing crisis in the U.S. and some communities are making a bad situation worse.

There is a growing trend of municipalities trying to use zoning and other land use regulations to restrict or eliminate manufactured housing in their jurisdictions. These actions could reduce the supply of critically-needed affordable housing for working families across the country and may be discriminatory under the Fair Housing Act.

The attempts at cities discriminating against manufactured housing are wide ranging. Some cities now restrict community owners from replacing units when someone moves, others are looking at banning them altogether, and some are segregating them at locations far out from local amenities such as schools, transportation, doctors and jobs.

Local city and county government’s use a variety of land use planning devices to restrict the use of manufactured homes as an available source of affordable housing. Interestingly, these devises are often in conflict with the entity’s comprehensive plan. These cases often involve zones within a community where manufactured housing fits the character and ascetics of the zone.

Lot Size
Rural Harrison County, Kentucky is attempting to pass a requirement that manufactured homes may only be placed on lots of 10 acres or more.  These types of ordinances are found in other communities and can range from 1 to 10 acres.

Lot size is not just a rural issue. In a community in South Carolina, the Georgetown council required minimum lot size in a zone predominated by older mobile homes whereby the practical effect would be to require the accumulation of several lots to build any new home. As this case involves a zone containing a majority of African American residents, HUD is investigating for possible Fair Housing violations.

Layering of Multiple Ordinances
When a Mississippi Supreme Court decision disallowed Pearl’s method of excluding manufactured housing, the city undertook changes to multiple land use planning devices (density, occupancy, setbacks) which allowed the placement of a home in a land-lease community, but made it illegal for anyone to occupy the home.

Density
Changes to density and setback requirements cause land-lease communities to provide homes on every other lot.

Restriction to Manufactured Home Communities (Parks) only
An affront to private property rights is where a government restricts the placement of manufactured homes to manufactured home parks only. An ordinance in Kentucky like this was passed in London, and following a lawsuit, reversed.

Age
A trend in western states (Kansas and Arizona for instance) is the adoption of ordinances where there is an age restriction on manufactured homes, disallowing the placement of a home more than 5- or 10- years old. These local laws basically place expiration dates on homes, and artificially kill resale values.

No Reason Whatsoever
The most frustrating cases come when a city or county denies the placement of a home for no reason whatsoever. In Washington Township, Ohio, it took a court order to force a zoning panel to issue a permit for the replacement of an older manufactured home with a new one. 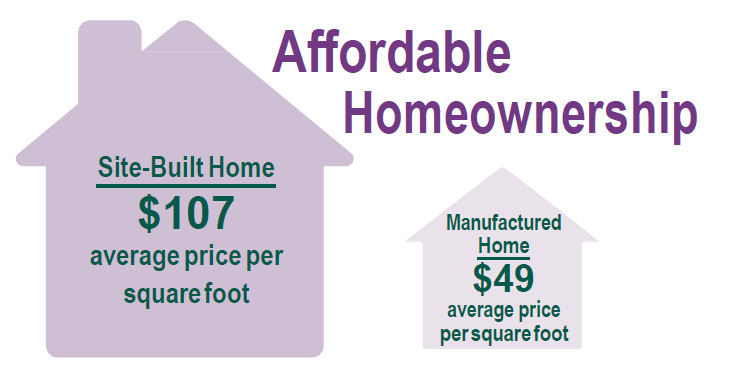